What is Charlie’s Gnarly Party?

Charlie’s Gnarly Party was born in 2015 at a baby shower. With his buzz wearing thin, Dave Hoffman sat and “enjoyed” his friends opening their baby gifts.

Among the Chinese goods were bibs, clothes, toys, and books. Not among the goods, however, were any kids’ books that kept the attention of anyone at the baby shower. The concepts and overall qualities of the books were simply not gnarly.

Dave wanted a kids’ book that would entertain everyone, not just a toddler who was going to fall asleep half-way through the book anyway.

Dave began writing a book full of puns, adult references, and humor at which he and his friends could laugh–and that the kid would also enjoy. He brought his best childhood friend, Cody Hagman, on-board as the illustrator.

Charlie’s Gnarly Party is the answer to countless boring-ass kids’ books that you dread reading to your kid because there’s nothing in it for you. If you’re into dinner parties, fine wines, decorative pillows, or sitcoms, you’re not going to enjoy this party. Shit, you’re not even invited.

Everyone else: LET’S RAGE! 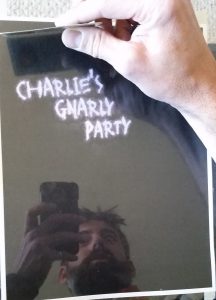